Both the HyperGH 14x pills and spray are made with a unique blend of potent ingredients, each of which play an important part in encouraging your body to naturally increase the frequency and amount of growth hormone production… not only before, during, and post-workout -- but even while you sleep!

The HyperGH 14x™ Supplement Capsules are intended to be taken TWICE daily (that's four capsules per day in total), to maximize your body's natural growth hormone production cycles – not just during training, but while resting and sleeping, too.

It's designed to contain 15 human growth hormone precursors in the highest, most effective amounts in order to provide the most powerful benefits.

The ingredients of the HyperGH 14x™ daily pills include:

Research indicates that L-arginine can boost HGH production by up to 300%, even into your senior years. It also can enhance your workout performance for high-intensity, short duration exercise.

Since your body doesn't produce L-arginine on it's own, it can normally only be acquired from your diet.

L-glutamine is an amino acid that's utilized most by the body while under stress, and it's essential to overseeing the function and support of muscle tissue, cell division, and cell growth. L-glutamine boosts energy and enhances brain function.

L-glycine is a vital trigger agent in the body that helps stimulate the pituitary gland to secrete HGH! It also creates a relaxing effect upon the brain and could even help maintain good overall prostate health.

Studies show that taking L-lysine in conjunction with L-arginine makes it 1000% more effective than by just taking L-arginine alone. It's also thought to strengthen immunity and improve sexual function.

Tyrosine is used by the thyroid gland for the manufacture of thyroxine. Research indicates that thyroxine is a key hormone that helps fight off fatigue and lack of motivation, and also regulates growth and metabolic function!

Tribulus terrestris has long been utilized as an herbal remedy for impotence and male infertility in Asia and Europe. Multiple research studies have been carried out by colleges and academic hospitals that verify the herb's many benefits.

Further research has indicated that Tribulus Terrestris may actually work by increasing production of DHEA (dehydroepiandrosterone), a powerful hormone in the body thought to be essential for sexual function and a healthy libido.

Another well-researched herb with a long history of use as an herbal remedy, astragalus root is frequently used to optimize metabolism and digestion, boost the immune system and speed up the healing process. It's also thought to help prevent fatigue, boost metabolism and perspiration, and enhance the operation of the lungs, GI tract and adrenal glands.

A favored medicine in the ancient traditional Chinese medicine, deer antler velvet is a type of cartilaginous tissue found in early-growth antlers. It's also a natural source of glucosamine, chondroitin, and collagen.

Deer antler velvet contains IGF-1 (insulin-like growth factor), which mediates the levels of HGH in the body and is linked with the cellular and tissue regeneration required for growth and healing.

Gamma-Aminobutryic Acid, also known as GABA, is a potent amino acid that triggers the manufacture of human growth hormone, and is also involved in maintaining the internal body clock that sets circadian rhythms.

Colostrum is a type of milk produced by mammals during late pregnancy and the days immediately following birth. HyperGH 14x™ contains bovine colostrum, which is basically indistinguishable from human colostrum - as a matter of fact, it actually has MORE of some of the most sought-after benefits!

Colostrum contains insulin like growth factors (specifically, IGF-1), which are technically precusors to human growth hormone. IGF-1 is measured to determine HGH levels and it's believed that IGF-1 is the main reason for the anti-aging properties of HGH. Studies on athletes have shown that colostrum can decrease recovery times and increase anaerobic power.

Some of the benefits associated with colustrum use are a heightened immunity response, faster recovery and healing rates, increased bone density and muscle mass, and a slow-down of the aging process!

L-Valine is an essential branched-chain amino acid (BCAA), which means that it cannot be manufactured in the body and must be obtained through dietary sources. L-valine has a stimulating effect and is required for the repair and growth of tissue, maintaining nitrogen balance, and for muscle metabolism. L-valine can be used as an fuel source in the muscles (where it's found in large amounts), preserving the use of glucose.

Anterior pituitary powder encourages the pituitary gland to function more effectively and to boost the production of HGH. It's also thought to help improve some age-related conditions, such as decreased muscle tone.

Phosphatidylcholine is the major component of cell membranes and is critical for brain and liver function. It is sourced from lecithin and is an superb emulsifier, enhancing the absorption of the other ingredients in the HyperGH 14x™ formula.

Phosphatidylcholine also blends with and reduces fat in the body, and is beneficial in the prevention of memory loss, heart disease, gallstones, depression, atherosclerosis, neurological disorders, and liver conditions.

Research has demonstrated that L-ornithine is roughly twice as effective as L-arginine, which as already noted, can as much as triple your HGH production! Even more so when used in conjunction with L-arginine, L-lysine, and L-glutamine, which are all also included in HyperGH 14x™!

Necessary for transporting glucose from the blood stream to the cells, chromium assists with maintaining glucose levels by optimizing insulin function. And a decrease in blood glucose levels can raise the production of HGH! The HyperGH 14x™ Oral Spray offers one of the newest, most advanced findings in the science of HGH supplements… Alpha GPC!

Bodybuilders and athletes who use Alpha GPC are awarded with two powerful benefits:

First, since alpha GPC is a precursor to a neurotransmitter known as acetylcholine, it's believed to stimulate the fast-twitch fibers in the muscles, providing harder, more powerful contractions and greater stamina. And second, research has demonstrated that it can...

Boost HGH Production By 4,100% During Exercise!
(As Opposed To Only A 2.6% Increase When Not Using Alpha-GPC) 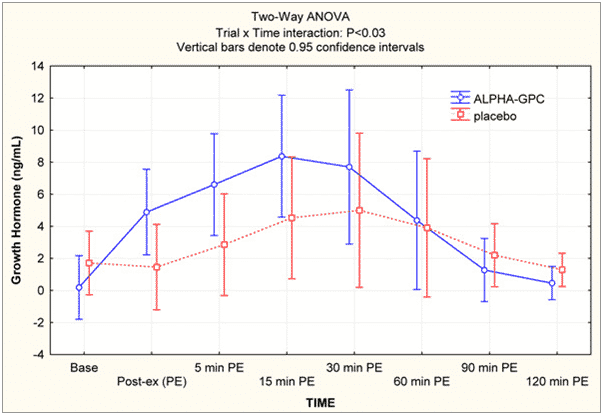 On top of that, alpha GPC is known to increase bench press power while at the same time reducing post-exercise breath-rate!

Other advantages associated with using Alpha GPC noted in the study include:

Just use the HyperGH 14x™ Oral Spray twice per day: once before exercise (or in the morning) and once at bedtime. One dose equals 3 sprays, so that's 6 sprays per day total.